UNH Franklin Pierce is the most racially and ethnically diverse college in the USNH system.

Since 2017 we have experienced a fivefold increase in students of color. We're making progress, but there is more to do and we're committed to the active pursuit of this positive change. 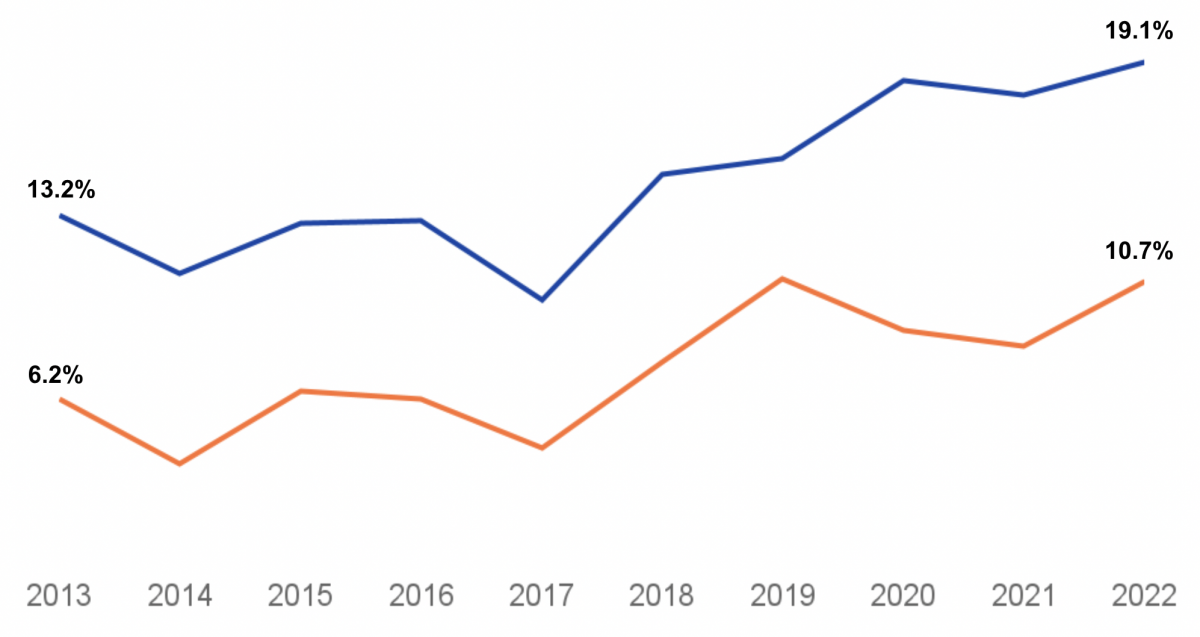 The University of New Hampshire Franklin Pierce School of Law is committed to building and sustaining a diverse, equitable, and genuinely inclusive environment for all students, staff, applicants, and visitors. We believe that to foster diversity and inclusiveness in our school means to acknowledge the intrinsic worth of varied experiences and to promote equality of respect and opportunity for every member of our community. We seek to encourage greater mutual understanding of the ways that individual differences have shaped personal identities. We aim to celebrate the differences that make each of us unique and to support the growth and talents of our community members to ensure that all may reach their full potential. We recognize that this climate of inclusion is vital to our continued success in attaining the highest quality research, scholarship, teaching, engagement, and all other strategic goals of our school. We accept and welcome the responsibility of teaching and learning in a diverse democracy where social justice serves as a bridge between a quality education and civic engagement.

For additional information on the University of New Hampshire’s commitment to a diverse, equal, and inclusive campus, please visit our flagship website at: https://www.unh.edu/inclusive/

On July 13, 1984, the University of New Hampshire issued the following bylaw entitled Policy on Nonsexist Language which reads:

The University of New Hampshire, as an equal opportunity educational institution, is committed to both academic freedom and the fair treatment of all individuals. It, therefore, discourages the use of language and illustrations that reinforce inappropriate and demeaning attitudes, assumptions, and stereotypes about sex roles. Accordingly, all official University communications, whether delivered orally or in writing, shall be free of sexist language.

Compliance with this policy shall be the responsibility of appropriate supervisory personnel. Concerns or questions regarding the implementation of this policy can be directed to the Director of the Affirmative Action and Equity Office at 862-2930 V/TTY. Copies of this policy and suggested guidelines for the use of nonsexist language will be available from the Affirmative Action and Equity Office and the President’s Commission on the Status of Women at 862-1058.

The University of New Hampshire is committed to establishing and maintaining an environment that puts concern for the dignity of its members among the central ethical dimensions of its intellectual enterprise. Discrimination and discriminatory harassment (including sexual harassment), unjustifiably interferes with members of the academic community and creates a circumstance in which access to education and work is diminished.

The University is committed as well to the free and open exchange of ideas, active discourse, and critical debate so necessary to a university. Accordingly, all members of the University of New Hampshire community have the right to hold and vigorously defend and promote their opinions. The exercise of this right may result in members of the community being exposed to ideas that they considered unorthodox, controversial, or even repugnant.

It is the policy of the University of New Hampshire to uphold the constitutional rights of all members of the university community and to abide by all United States and New Hampshire State laws applicable to discrimination and harassment. In accordance with those laws, all members of the UNH community will be responsible for maintaining a university environment that is free of intimidation and harassment. Therefore, no member of UNH may engage in harassing behavior within the jurisdiction of the university that unjustly interferes with any individual’s required tasks, career opportunities, learning, or participation in university life.

Verbal or physical conduct directed at the complainant’s race, color, religion, age, sex, national origin, disability, veteran status, marital status, sexual orientation, or gender identity or expression, is a consideration in the determination of discriminatory harassment. The university will consider the totality of the complaint and its circumstances, the private or public environment of the behavior, the intensity or severity of the actions, the pattern of behavior and the power relationship, if any, between the parties.

Discriminatory harassment does not include comments that are made in the classroom that are germane to the curriculum and a part of the exchange of competing ideas. A single incident that creates a distracting and uncomfortable atmosphere on a given day does not constitute discriminatory harassment. However, isolated or sporadic acts that are severe may. It is possible for a series of individual incidents, each minor in itself, to have the cumulative effect of becoming pervasively harassing behavior.

Factors to be weighed in the determination of discriminatory harassment include conduct that purposefully places or threatens to place another in fear of imminent bodily injury, and threatens to commit any crime against a person with a purpose to terrorize.

In determining whether discriminatory harassment exists, the University will evaluate the evidence from the standpoint of a reasonable person’s reaction and perspective under the circumstances presented.

Every instance of alleged discriminatory harassment must be considered in the context of its specific and unique circumstances. However, the following are examples of behaviors that may be judged to be harassing: repeatedly directing racial epithets at an individual; hanging a noose in an African-American’s work place or dormitory; painting a Nazi swastika on the door of a Jewish individual; repeatedly sending unwelcome, sexually-explicit email messages; taunting a person about his or her sexual orientation, disability, or religion; making unwelcome sexual propositions; repeatedly telling derogatory gender-based or ethnic-based jokes; displaying sexually suggestive objects or pictures in the workplace except as those items may be part of legitimate pedagogical pursuits; giving unwelcome hugs or repeatedly brushing or touching others.

A person who believes that he or she has been harassed should take steps to resolve the matter. Those steps may begin with direct, voluntary communication with the person engaging in the behavior in question, in an attempt to resolve the issue. Should the complainant not wish to contact the accused directly, the complainant has the right and is encouraged to pursue procedures that result in an administrative resolution or judgment. Any University community member may contact the Director of the Affirmative Action and Equity Office with a harassment complaint, including sexual harassment. Alternatively, members of the community may choose to contact any one of the persons listed below, who will serve as a liaison to the Director. Students with complaints against other students may file a complaint with either the Office of Conduct and Mediation or the Affirmative Action and Equity Office. Complaints against faculty or staff are handled by the Affirmative Action and Equity Office.

Students may find it helpful to contact one of the following depending upon personal circumstances and student status:

Reprisals or retaliation against any person bringing a complaint through this process will not be tolerated, no matter whether the complaint is ultimately judged to be consistent with the criteria determining harassment or inconsistent with the criteria determining harassment. The university will pursue administrative action against those found to have retaliated against any individual participating in the complaint process. Also, the bringing of capricious or reckless complaints will not be tolerated.

The Discrimination and Discriminatory Harassment Policy identifies (1) protected categories, (2) clarifies the process for addressing certain complaints against university employees, and (3) incorporates various updated legal requirements. Please consult the on-line version of this policy at https://www.usnh.edu/policy/unh/v-personnel-policies/b-affirmative-action-and-equity#unhvb5 or for a copy of the Discrimination and Discriminatory Harassment Policy booklet, contact the Affirmative Action and Equity Office by phone at 862-2930 V/TTY or email at dms@unh.edu.

As we all journey on the trail of life, we wish to acknowledge the spiritual and physical connection the Pennacook, Abenaki, and Wabanaki Peoples have maintained to N’dakinna (homeland) and the aki (land), nebi (water), olakwika (flora), and awaasak (fauna) which the University of New Hampshire community is honored to steward today. We also acknowledge the hardships they continue to endure after the loss of unceded homelands and champion the university’s responsibility to foster relationships and opportunities that strengthen the well-being of the Indigenous People who carry forward the traditions of their ancestors.

LISTEN TO THE ACKNOWLEDGEMENT READ BY DENISE POULIOT

Developed by a committee and approved by Tribal Elders, the committee built this acknowledgement with six guiding principles/critical elements:

We want to recognize faculty in the College of Life Sciences and Agriculture for their service and contributions. We appreciate their dedication and commitment to creating a meaningful and impactful UNH Land, Water, and Life Acknowledgement – an Acknowledgement that has been well-received by the UNH community and the state of New Hampshire. We recognize committee membership on the NH Commission on Native American Affairs and on the COLSA DivInE committte. We honor the Indigenous heritage represented by committee members from the Wendat, Algonquin and Mi’kmaq peoples and we honor the Indigenous representation of committee membership in the Cowasuck Band of Pennacook Abenaki and of the Mohegan, Shawnee and Cherokee peoples.

We also want to recognize the work of faculty in the Department of Anthropology, and the College of Liberal Arts  who laid the groundwork for the Acknowledgement by building and helping to sustain relationships between UNH and tribal leaders.

Inquiries regarding discrimination should be directed to:

The Director of the Civil Rights and Equity Office is the Title IX Coordinator for UNH. The time limitations for filing a complaint are: with UNH, one year; with OCR, complaints of discrimination must ordinarily be filed within 180 days of the last act of discrimination. If your complaint involves matters that occurred longer ago than this and you are requesting a waiver, you will be asked why you did not file your complaint within the 180-day period; with NHCHR, a charge MUST be filed within 180 days of the last date of discrimination. (Under certain circumstances a charge may be filed up to 300 days from the date of alleged discrimination. If you are beyond 180 days, contact the Commission immediately to find out if you have the basis to file a timely charge.) With DOJ, please contact them directly for information. 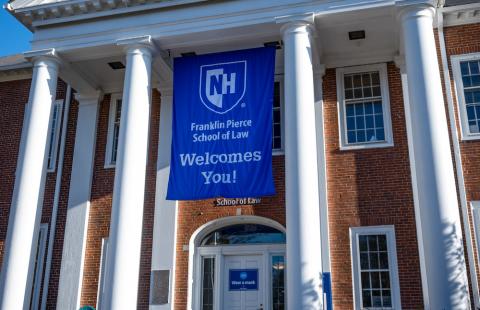