Ohio native and 2L Jo Egeland is turning her passion for criminology and sociology into a career as a public defender.

Walking through the center of campus as a student at Ohio State, Johanne “Jo” Egeland often found herself challenged to recognize any familiar faces. 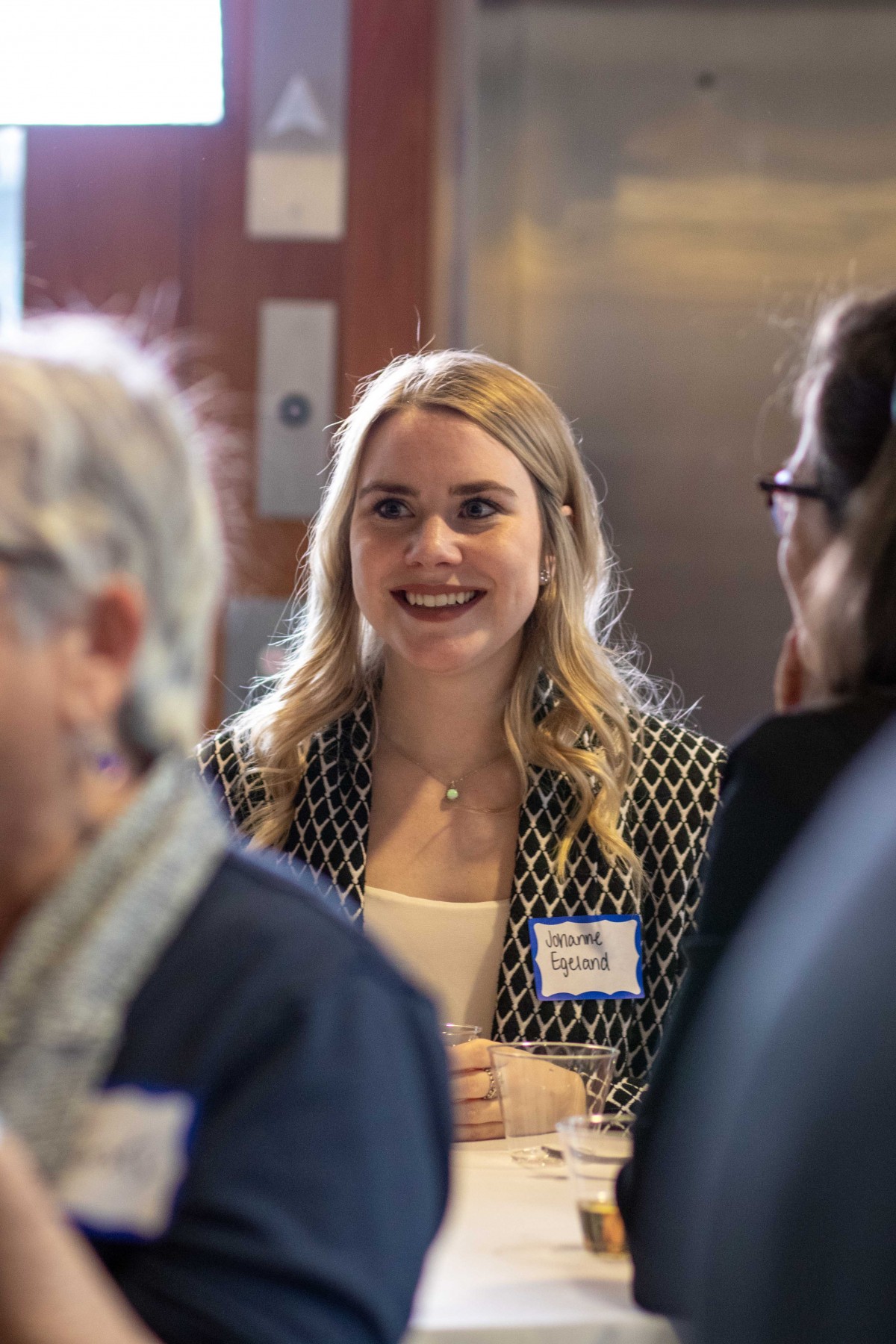 Though a member of a vibrant community, on a campus of nearly 47,000 undergraduates, Egeland could get lost in the crowd. She knew that while pursuing her JD, she wanted to be part of a smaller community, where she could make connections with professors and be more than a number. It was at a law school fair at Ohio State that she first learned about UNH Franklin Pierce School of Law. Despite never having been to New Hampshire, though her family had vacationed in Maine a few times, Egeland decided to take the leap. On her visit to campus later that year, she found exactly what she had hoped as she walked around with Director of Admissions Patricia Morris.

“Everyone knew her and she knew everyone – and could tell me something about them,” recalls Egeland. “I found it to be a comforting environment and, now that I’m here, I know I made the right decision.”

Taking a chance on a small New England law school brought Egeland to Concord from her native Hudson, Ohio, near Cleveland. She graduated high school in 2014 and initially declared a political science major at Ohio State. But a sociology class began to turn Egeland’s attention toward criminology. She soon became interested in not only how crimes are committed, but the psychology of why, including socioeconomic, mental health, and family factors. She ended up graduating in 2018 with a degree in criminology and a minor in forensic science.

“Growing up, I was never really surrounded by a lot of crime, so my views of criminal activity came from TV shows that I now know are not accurate,” she says. “It’s interesting to understand why people do the things they do. We might think what they have done is bad, but there is a cycle that may be normal in their life.”

With an eye toward a career as a public defender, Egeland has carved a path in her studies at UNH in public interest law. Her decision to focus her attention on criminal defense was solidified after a conversation with a New Hampshire-based public defender she met last year at a job fair. Egeland spent the summer of 2019 completing an internship with the office of the New Hampshire Public Defender. There she was able to shadow the attorneys at hearings, gaining strong practical experience around court proceedings. She also was able to get to know clients and witness everything from bail hearings to trials for misdemeanors and felonies.

“It was interesting to see how both the prosecution and defense would lay out their cases,” says Egeland, who plans to return to the Public Defender program for a second summer. “And getting to know the clients is a huge part of public defense, in understanding their backstories.”

This year, as a second-year law student at UNH, Egeland is one of half a dozen students in the Criminal Practice Clinic. Under the guidance of Professor Richard Samdperil, Egeland and her peers in the clinic represent the rights of low-income clients charged mostly with misdemeanors, though sometimes with felonies. Through the clinic, they gain practical experience by engaging in multiple aspects of legal representation, from interviewing clients to gathering the facts to build a defense. Cases can range from driving offenses to burglaries to drug charges.

“Through the Criminal Practice Clinic, I’m able to get experience on my feet, go in front of the judge, talk to prosecutors, and get the best outcome for my clients,” Egeland says. “People do things that we think deviate from society’s views. But they may have mental health or addiction issues or be in an ongoing cycle of violence or crime. At least in the New Hampshire judicial system, there are so many treatment programs and programs for mental health for our clients. I’m very big on the idea of rehabilitation; you can’t keep sticking people into the system and expecting them to get better.”

On the way to her JD, Egeland has become most immersed in classes that apply to her future career, including courses in criminal law, immigration law, and family law. She counts among her mentors Profs. Samdperil and Amy Vorenberg, who teaches Egeland’s criminal law class and also serves as her faculty advisor. Prof. Samdperil, she says, is keen on helping his students gain experience via the Criminal Practice Clinic. Rather than simply having them shadow him in court, he encourages them to take the lead. Prof. Vorenberg has provided ongoing support for Egeland in planning her future.

Ideally, that future includes a career as a public defender – possibly even in Egeland’s adopted home of New Hampshire. In addition to the nurturing community she has found at Franklin Pierce School of Law, Egeland has come to appreciate Concord’s location “an hour from Boston, an hour from the beach, and an hour from the mountains.” The legal profession in the state is welcoming, Egeland says, which reassures her that she’s on the right path.

“When it comes to public defense,” she says, “especially in New Hampshire, networking is so important and the attorneys are so willing to help each other out.”