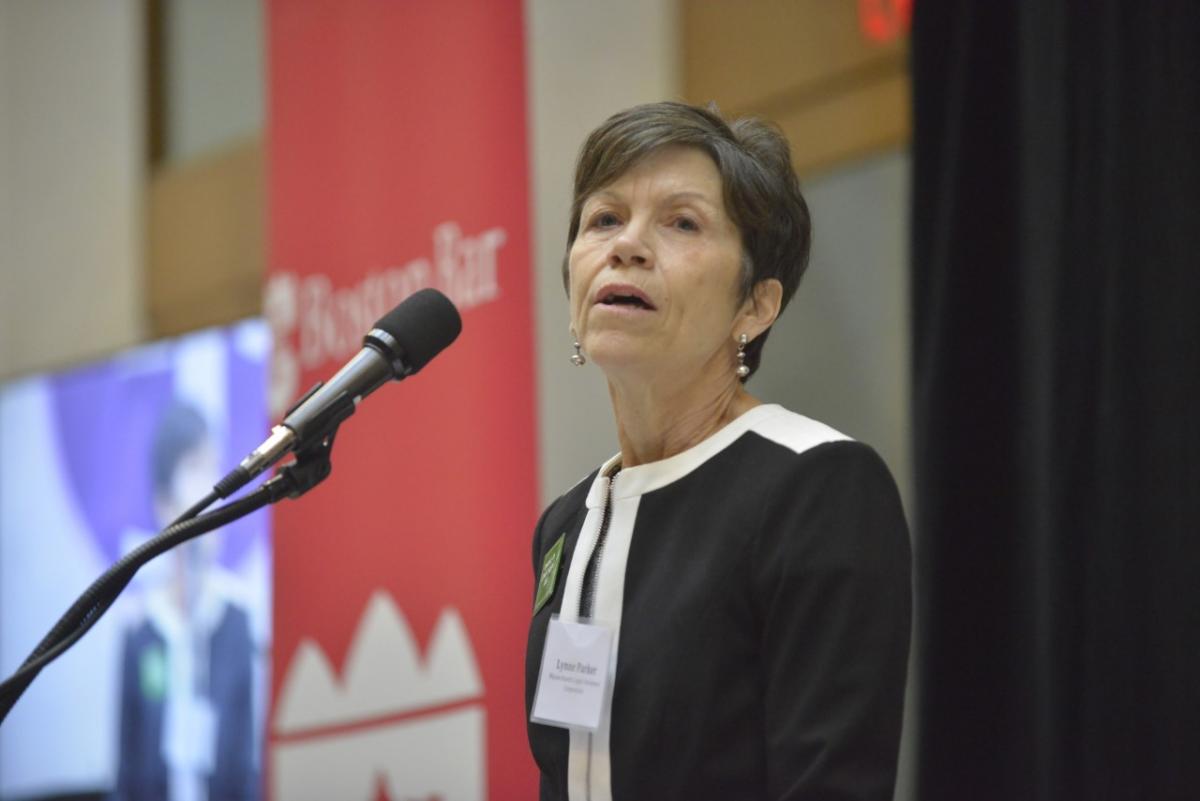 As she was nearing her college graduation, Lynne Parker, JD ’88  knew she wanted to enter the Peace Corps. Her experience through volunteering to help women in Guatemala start small businesses piqued further interest in what has turned into a decades-long legal career spent serving others.

“I honestly felt like when I went to law school” Parker says, “that was the only work that was interesting to me.”

In Guatemala, Parker and other Peace Corps volunteers were charged with encouraging women to become members of a savings and loan cooperative and showing them that, with diligent attention to those savings, they could eventually become business owners.

“I ended up working with three different women’s groups in three different areas outside of Guatemala,” recalls Parker, who was able to communicate effectively in Central America through her fluency in Spanish. “I saw public interest law as being able to make a difference in a way that I would feel good about and would want to be involved in over the course of my career.”

Today, Parker serves as executive director of Massachusetts Legal Assistance Corporation (MLAC), a statewide nonprofit that acts as the largest source of funding to regional and statewide civil legal aid organizations. In that role, she lobbies the state for legal aid funding in its annual legislative budgeting process. She also has worked to develop partnerships with state agencies and other local funding sources aimed at expanding access to legal services for those who cannot afford it.

Parker speaks proudly of the coalition between MLAC, the state Bar Association, the Boston Bar Association, and the Massachusetts Women’s Bar Association, particularly through the annual Walk to the Hill. In a show of solidarity, the event draws hundreds of advocates to urge the state legislature to make legal assistance a priority in its annual budget.

“We often have 750 to 1000 people who attend, primarily from the private bar, and — after they come and listen to speakers — they’re charged with going to meet with their own legislators at the State House to talk to them about how important it is to support legal aid. To me, that’s just the most amazing model of how to advocate for funding.”

Prior to joining its Massachusetts counterpart, Parker spent nearly 20 years (1999-2018) at New Hampshire Legal Assistance, including the last four as the organization’s executive director. Though the two organizations have similar missions, Parker explains that the New Hampshire group is the statewide legal aid provider which works closely with 603 Legal Aid (formerly the Legal Advice and Referral Center and the NH Bar Association’s Pro Bono Program) while the Massachusetts group provides funding and a variety of support services to legal aid organizations in the Bay State.

In her years as a public interest attorney in New Hampshire, Parker worked to provide assistance to clients in need in a variety of ways, but one of the primary areas in which she found herself engaged was homelessness prevention cases.

“Legal aid programs often prioritize subsidized housing cases where people might be facing potential eviction because, if you either have a subsidy that’s attached to your apartment or you have a portable voucher, the loss of either of those is dire,” Parker explains. “I did a lot of work around fair housing, for people who had physical or mental health challenges or disabilities who either needed accommodations because of those disabilities or needed to have changes made in their apartments to make sure they were accessible. Those are really important cases.”

Cases that involve housing, Parker says, can quickly reach a crisis level. She speaks of the compassion and patience required of attorneys in those cases, and the need to attend to one’s own mental health. “Because there’s always more need than you can meet at a legal aid organization,” she says, noting that at least a quarter of those clients typically have either a physical or mental disability, “you have to make decisions every single day in terms of what people you can assist and what people you cannot, or which people you might give some limited assistance or advice to, because you think they may be able to succeed on their own.”

Throughout her career, Parker has made it her mission to be in service to others. She gained her first legal aid experience at Pine Tree Legal Assistance in Bangor, Maine, in the early 1990s, where she represented migrant farm workers, many of whom had made a seasonal pilgrimage from Spanish-speaking areas of the U.S. or from Mexico. As she had in the Peace Corps, she was able to use her fluency in Spanish to communicate with those she was assisting and make genuine connections. For the first time, she gained exposure to the hardships faced by workers who did not have access to sufficient housing, who often had no choice but to bring their young children to work with them and expose themselves — and their offspring — to pesticides.

“I realized the unbelievable kind of demands placed on them every single day,” Parker says.

As with virtually all areas of life, legal aid has been greatly impacted by COVID-19. Parker credits the dedication of the staff at legal aid organizations forfinding ways to continue to support clients in need, despite the crisis. At the height of the pandemic, some of those clients didn’t have access to smartphones or WIFI, and were for a period of time not able to seek help in person due to safety restrictions. Remote hearings in lieu of courtroom advocacy proved to be an extension of those challenges. Legal aid staff across the state, Parker says, were often meeting clients “on the back of cars and on the stoops of their apartment buildings,” highlighting the dedication it takes to practice public interest law.

“Much of what legal aid staff do is to help people with their very basic needs,” Parker says, “their housing, their income, their food security, their safety, their health. If you’re the kind of person who’s drawn to doing that kind of work where you really care about preserving those basic needs so people aren’t seeing their lives completely fall apart, then it’s something to consider. It’s challenging but very fulfilling work where you can really make a difference.”